I caught my son stealing 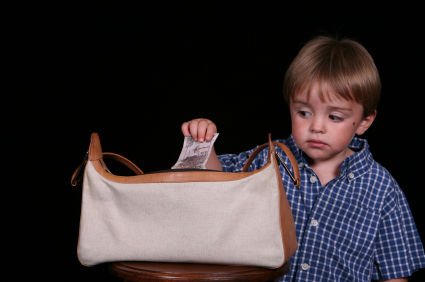 One possibility is that he flatly denies it.

In this case, praise him for his honesty, tell him that you are very pleased that he is telling you the truth and how much you value his trustworthiness.

Apologize for having to bring it up. Tell him you really didn’t want to ask but you had to check out every possibility. Subtly ask him in the middle of the conversation how he got so much money, but if he explains it away then keep with the program.

You can also explain that it’s not safe to leave so much money around in his room and maybe he should open a bank account.

The point here is, you want to build his sense of truthfulness. If he is telling the truth, great. But, if he is really lying he’s going to feel bad that he received all this praise inappropriately and it will play on him that he lied to his mother.

What’s next? Well here are some probable outcomes:

1) He really didn’t take the money. If you really said it in a tone that conveyed your trust in him, then all will be ok. He will think you believe him when he said he didn’t take it and he will feel good knowing his mother trusts him.

2) Alternatively, if he did take it you could very well see some regression in his behavior as he battles within himself these contrary feelings. At this point, sit down with him, look him straight in the eye and point blank ask him if there is something bothering him that he wants to tell you (without mentioning the act in question). If he keeps with the denial, tell him he will feel much better telling you than holding it in.

Be sure to emphasize that you will always love him, praise him again and whatever he does won’t affect how you feel about him.

If he still denies it, then again keep to the original script.

However, if he admits what he did wrong, either at the beginning or later, then this is the approach to take:

Obviously praise him for his honesty, then ask him why he did it. Don’t expect anything too deep, but you never know what might be going on inside.

Now, this is the tricky bit.

Rabbi Noach Orlowek explains, children want to live up to our expectations. If they know you think of them poorly then there is not much for them to live up to.

If you think about it, a big part of a child’s motivation to succeed in school is to make their parents happy.

Unlike us, a child doesn’t get a promotion, a bigger house or bonus for getting a better grade, all they get is our praise. So don’t take that away from them or you could easily end up with a child who is even less compliant.

For sure they like toys and treats, but these are short lived. An underlying driving force for their consistent behavior is living up to our expectations.

This is a major reason why children who don’t have a loving family are at high risk, you can’t bribe them enough to build consistently good behavior.

So instead of making them feel worse than they already do, inspire them to be greater. Explain to them how valued they are in your eyes and how much this act is beneath them.

In a real sense it’s like being a member of the royal family and one of the princes did something un-becoming.

If you can make your child feel like royalty, you’ve turned a negative into a big plus which will reap long term gains.