Que: What is the difference between talking to a brick wall or talking to your average teenager? 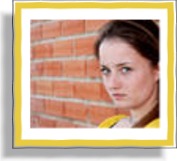 Try this at home, take a piece of paper and make a list of all the times you have thought to yourself, “One day I’m going to tell my boss what to do with this job!”

Stop when you get over 5,000. So why didn’t you say what you were really thinking?

The answer is, because it wouldn’t look good on a resume. Your resume starts when you learned how to bite your tongue.

And now you understand your teenager. Teenagers don’t need resumes to take chemistry or to try out for the school team.

To be precise, there really is no significant difference between you and your teenager except teeth imprints (in your tongue). In other words, the things your teenager says are not that different to what you think, it’s just you won’t say them.

When your teenager says to you, “What’s wrong with traveling through Europe and living on the beach for the rest of my life?”

You are thinking, “Oh I wish I could do that, but how do I pay the mortgage?” So instead you say, “That’s the most ridiculous thing I’ve ever heard.” Then you storm off and ask your spouse why it’s such a bad idea.

Teenagers, it has been said, only differ from babies in that they lack self control at only one end of their frame. It takes about three years for a baby to be toilet trained, and it’s about another twenty years for them to learn to be mouth trained.