Teenagers killed off the dinosaurs…. 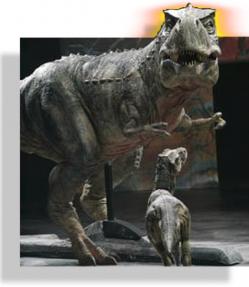 The question now is, are we going to survive?

Despite the fact that every parent will testify otherwise, teenagers really do react to consequences, almost like normal people!

They like having use of the car, cell phone, etc. And taking away these things is an incentive to behave in a relatively civil manner.

There is one caveat to this rule: “Things” to a teenager do not have the same value as they did to a pre-teen. And this is where parents mess up.

Parents, for some reason, don’t seem to realize that their precious little bundle of aggravation now has a life. “Things,” as important as they are, are not more valuable to a teenager than their lifestyle.

Even the threat of being grounded may not cut it with your average nose-piercing teen. Therefore, just as your teen has upgraded their life, you, as a parent have to upgrade your carrot and stick.

Whereas in the pre-teen years, computer time, toys and treats may have sufficed, for a real teenager the consequence has to be of a much higher magnitude.  A parent needs to take it to what they call in the military, Defcon 1:

What is that?
For a teenager, there is no worse punishment a parent can inflict then “Face Time.”

They hate, hate, hate talking to you. Not because it’s you per-se (although they will tell you that), but more because they don’t want to deal.  You are, most likely, the only one who points out to them they are not being responsible, and they desperately need to feel mature.  So, having the conversation with them about how they didn’t live up to their responsibilities is sheer torture to a teenager. And, if they ever run the country, it will be up there with waterboarding.

It’s important to appreciate that the least sophisticated of teenagers, those with no special talents or training, can get out of "Face Time" with a parent easier than 25 trillion dollars can leave the Federal Reserve these days.

How do they do it?  Simple, all they have to do is get you mad. They start with the “look” (see above). Then maybe some comments about your personal hygiene, maybe even some juicy guilt-laden moments or stories your mother told them about what you were doing at that age.

Whatever it is, it’s a ploy. They know if they get you angry, you won’t be able to do the deed.

What’s the deed: talk to them.

This conversation has to be calm. They on the other hand hate calm, they love shouting and accusations, it’s like a sport. Your average teenager doesn’t want it to be calm, because calm means I have to talk about what I did wrong.

So they will try pushing your buttons. They do this so they don’t have to answer your difficult questions.

So, my ultimate parenting advice for those entering the dreaded teenage years. If you want to be meaningfully involved with your teenager, you need to be in control or yourself, or…

Wait a few million years and maybe the next version will be easier.