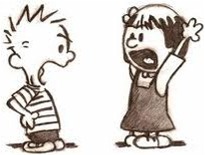 This idea is so embedded in parental culture, that it’s often spoken of as one of the ten commandments of parenting.
So how bad is this advice, really?
To use the nutritional analogy, it’s akin to giving your kids junk food for breakfast – every day. The problem is you won’t know you fed them this rubbish until much later, when it will be too late to fix the problem.
Let me explain the thinking behind the advice, then it will become clear the damage it causes. If you argue in front of the children, the theory goes, then they will think you have an unstable or unhappy marriage. Hmmm. Let’s think about that one.
First, let’s dispel the myth. Studies have shown (and common sense would dictate) that marriages that last, and ones that don’t, argue almost equally. Thus, arguing is no indication of whether you have a good marriage or not.
Therefore, by pretending you have a good marriage (by not arguing in front of your children) leads your children to believe that happily married people never argue!
Here we come to the common sense part. It’s not possible to live with someone (unless it’s in a fairy tale) and not argue.
Sometimes often.
Think about it. You have spent 20-30 years developing a unique personality with your own ideas, desires, drives and (lets not forget) idiosyncrasies. And so has your spouse (especially the idiosyncrasies). What are the chances that you can live under the same roof, share the same everything, and not come to disagree about most of it?
Exactly. Arguing is normal, natural, and in fact, a very healthy part of marriage.
A woman once asked me, “I have a problem with my husband, we argue all the time.”
I said to her, “Arguing all the time is not great, but you should appreciate there is something that is much worse.”
“What is that?” she asked.
“Never arguing.” Arguing is a sign you care what the other thinks or does. Not arguing is a sign you don’t care.
Therefore, if you engage in the practice of never arguing in front of the children, your children will grow up believing happily married couples don’t argue – which, as I have explained is impossible. They may also justifiably conclude that you don’t care much about each other either.
So what?
So, when they get married they are going to have their first argument and then bingo! They are going to think, “My parents didn’t argue, and they were happily married. So it must be that I married the wrong person.”
In fact, what you need to show your children is how to argue properly with your spouse. Show them how you can both have very divergent and strong beliefs and yet you don’t disrespect each other or speak in disparaging terms.
Even better is if you can show your children how you can resolve an argument.
How do you do that? Only if you argue in front of them.
There are however, two ground rules:

1) If the argument gets out of hand and starts to get ugly. Here is a very important rule. If you are arguing in a way that you wouldn’t want them to see, then it’s an argument you should not have until you can calm down and talk to each other respectfully and appropriately. This rule applies even if you are not arguing in front of the children.
2) If the topic of the argument is not something the children should hear. As I like to say, don’t discuss your pin number in front of your teenagers.
So now that you don’t have to wait until the kids go to bed to have that fight you’ve been waiting for, you can now do something productive in the evening, maybe even read up on those vitamins!