Why Can’t I Get Happy? 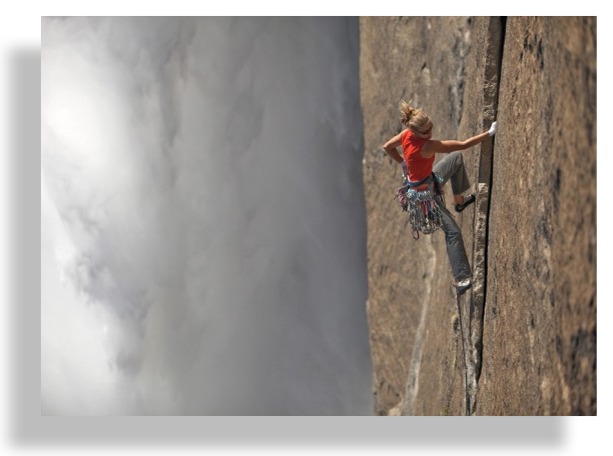 Take your average monkey and give him a truck load of bananas. credit: National GeographicThis picture is of Kate Rutherford. No, the picture is not on its side, and no, she is not climbing to escape marauding Cossacks who just invaded her little village and this was her only escape.

She is climbing a vertical stone wall (next to Yosemite Falls) because a life of three meals a day and of no obvious threats, is not happy enough!

I quote: “The water polishes the rock like glass. Wearing tape on her hands, she has to repeatedly jam them into fissures for the ascent.”

What was wrong with her life that forced her up a vertical rock?

That was her problem.

Let me tell you a personal story of mine. A very wealthy patron to our cause was forced into retirement because of a stroke, and even though his mental faculties were fine his communication was too stilted to keep him in business. One day he said to me, “Steve, I have a problem.”

This man was living on an immaculately beautiful landscaped piece of land that he owned and stretched as far as the eye could see. He had a dozen servants at his beck-and-call. He lacked for nothing.

I looked at him incredulously and said, “What’s the problem?”

“I have no problems” He replied.

Because of his physical condition he was surrounded by a team of people whose only job was to ensure his happiness. The only thing he could do to live a little dangerously was to not wear a seat-belt, which I am sorry to say, was the very thing that killed him. The picture on the right is Steph Davis. She’s doing what is called “Free Climbing” or “Free Soloing.”

The free doesn’t refer to the cost, it refers to the fact she doesn’t use ropes!

You might be tempted to think it’s crazy, but it’s no different than golf. It’s easy to get to the top with a helicopter, it’s also easy to get the little white ball in the ridiculously small hole. But not if you only use a bent club.

We don’t want “easy” because “easy” does not make us happy.

It makes monkeys happy, it makes elephants happy and even makes plankton happy, but it does nothing for us. In fact, as soon as we reach any stage of equilibrium we will immediately seek a new path of danger.

Yes, you’ve guessed it, none. Why?

Because they were too busy staving off the black plague or hoping their wives didn’t die in child-birth, or that the Russians didn’t invade, or countless other constant and real threats they lived with daily. One would think, and most people did, that when we rid the world of all the existential threats we would achieve peace, tranquility and happiness.

How’s that peace and tranquility working for you?

If we don’t have real threats, we commission them.

Think about the entertainment and news we surround ourselves with. It’s all stories of problems and disasters. The bigger the disaster the more prominent the headline. Why? Because we need the excitement of problems to make us feel alive. In fact, it’s so natural to us, we don’t think it’s odd.

But it is odd, relative to the rest of creation, animals just don’t try and make their lives more difficult. They aren’t looking for problems.

In fact, this perspective will not only help you in understanding yourself, but will change the way you think about and deal with your spouse and children.

This is part of a real conversation I had with a father pulling his hair out from what he perceives as a lethargic son. His sons’ inaction is piling up one giant obstacle on top of the other, in what the father clearly sees as an easily avoidable mess. At this point, the son faces some serious consequences, not least of which is prison. To the father the solution is easy, stop making your life so difficult.

And if his son were a monkey, he would listen.

“So why does the son insist on doing things that make his life more difficult?”

You aren’t getting this are you?

When your kids were little it was cute that they tried to get out of their crib, jump off the stairs and other relatively adventurous stuff. In fact, we encouraged it. We didn’t tell our two year old, “Listen, if you play your cards right you can stay in this crib for the next 20 years.”

We didn’t tell him, but we didn’t need to. Children, unlike monkeys need the challenge.

The problem is, when you tell your son that not wearing a seatbelt is dangerous, what you are really doing is inviting him to try.

As the preverbial saying goes, you are just adding gasoline to the fire. If you are wondering why your children consistently get you mad, it’s now easily understandable, because you are the danger in their lives.

Danger for a child IS the goal.

It’s actually our goal too, it’s just we call it CNN.