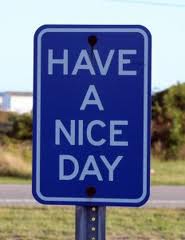 I remember being interviewed on a national radio show about some of my more famous students. The host (Jewish) was convinced that the people I teach were happy, so she spent the majority of the interview trying to figure out why these “happy” people would need to consult with a Rabbi. Despite her cognitive dissonance, I kept repeating that these people are just as un-happy as your average National Public Radio talk-show host.

It’s important to distinguish between truly enjoying life and having a good time now and again. Jews are great, actually they are experts, at having a really good time (now and again). When a Jew sets out to have a good time, no expense or detail is too small.

For example, the last 3,500 years of Bar Mitzvah’s were pretty much all the same fairly boring events. No one ever came back from a Bar-Mitzvah to be asked, “What was it like?” That’s because they were all the same.

Now it’s not uncommon for parents to engage the same level of strategic thinking for their blooming daughter that Eisenhower used to invade Normandy. Every detail receives the scrutiny of an FBI crime scene to ensure the guests appreciate what a hero they are, because no attendee at the “re-enactment of the Titanic Bar-Mitzvah” ever thought the bar-mitzvah boy (or girl) was a genius, it’s the parents who get the praise.

And that’s the problem.  As Rabbi Noah Weinberg tz”l explained, you can’t enjoy life and be a hero too.  And boy, do Jews ever want to be a hero.

You never heard a bar mitzvah boy or girl stand up and say, “I plan on settling down in the country and having a nice quiet life with an unlisted phone number. Please don’t bother me.”

Today is not the day they become an adult, rather this is the first day on their path to becoming a hero. Now, how to actually save the world from imminent destruction is another question.

The problem is, no one tells them you can’t enjoy life and be a hero too.

The trick of life is to solve the crisis, without WANTING to be a hero.

And there is a “Bar Mitzvah Extravaganza” world of difference between those two.

Winston Churchill famously explained: “Sometimes doing your best is not good enough. Sometimes you must do what is required.”

A hero is about me, not what is required.

There is a true joy in filling a need in the world. And no end of misery in trying to be a hero.

We have raised a generation of Bar-Mitzvah-heroes, it’s time to realize we have a crisis.